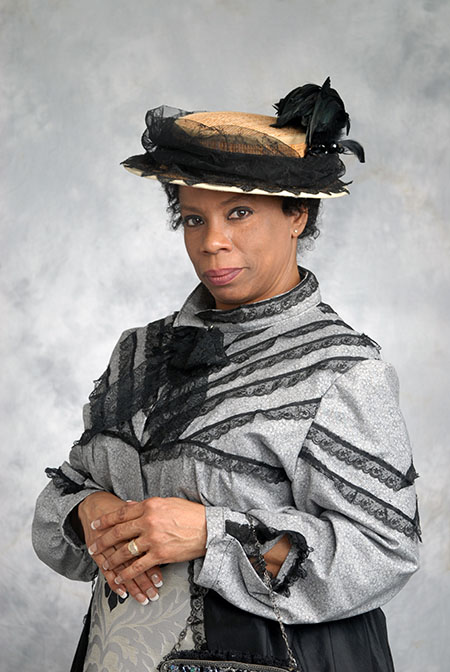 Nancy Green became one of the first prosperous African American women in the U.S. Green was born enslaved in Montgomery County, Kentucky, in 1834. While in Kentucky she worked for the Walker family, and moved with them to Chicago just after the Great Fire, in 1872. Eight years later, Nancy Green became “Aunt Jemima.” Businessman R.T. Davis had purchased a pre-mixed, self-rising recipe for pancakes and wanted an “Aunt Jemima,” a character from minstrel shows, which were popular at the time, to be the face of his pancakes. “Aunt Jemima” would be a friendly, animated, African American cook who served a wealthy white family. Playing the role of “Aunt Jemima” gave Green financial independence few African Americans and few women experienced at the time. She used her wealth as a means to empower her community. She was particularly active in her church, leading missionary trips, investing in anti-poverty programs for African Americans, and advocating for equal rights.

Nancy Green is portrayed by Debra Faulk of Lexington. Faulk has spent years working in theatre previously serving as a lecturer with the University of Kentucky Theatre and Dance, an artist with the Theatre of Hearts in Los Angeles, and a teaching assistant at California State University, Los Angeles. Faulk has been a part of many regional productions including performances with the University of Kentucky Department of Theatre and Dance, the Lyric Theatre and Cultural Arts Center, and has entertained at several comedy clubs.

Bo List of Lexington is the script writer. List has been working in the area as an actor, writer and director for more than 20 years.

Kentucky Humanities is a non-profit Kentucky corporation affiliated with the National Endowment for the Humani­ties. For more information, visit kyhumanities.org or call (859) 257-5932.