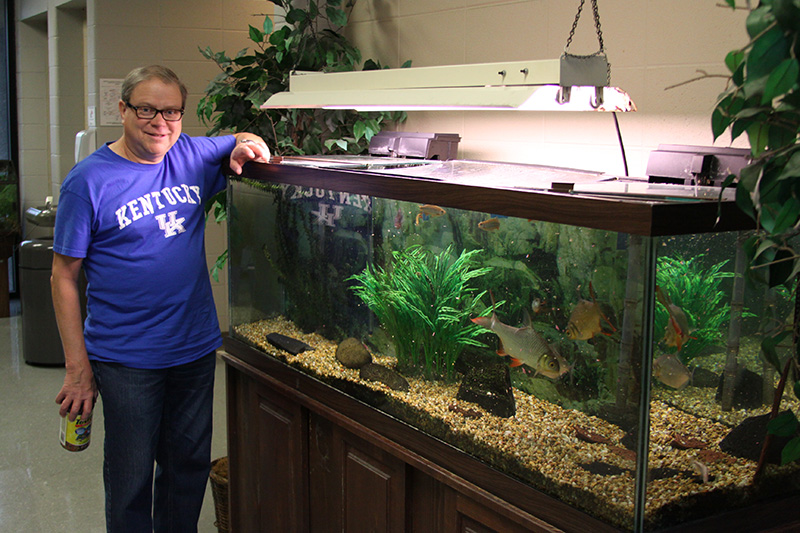 On the second floor of the Campbell Science Building on the Prestonsburg campus of BSCTC there is a 125-gallon aquarium that has been meticulously maintained by Mathematics professor Dwight Smith for over twenty years! If you’ve ever own an aquarium of any size, you will understand the dedication and work that goes into creating a healthy underwater environment in which life can thrive.

Professor Smith is in his twenty-sixth year of teaching at BSCTC, and a lot has changed in his daily life throughout the years. From face-to-face classes into online teaching, Professor Smith spends the majority of his time with students virtually in their pursuit of mastering trigonometry, calculus, and differential equations. However, one constant has been the continuous care of the aquarium and its inhabitants.

“First I tried keeping some native fish such as bluegills and channel catfish.  Unfortunately, they proved to be impossible.  Bluegills are very aggressive.  We all know how feisty they can be when hooked on a fishing line!  And native catfish love tearing up an aquarium’s scenery” stated Professor Smith.

After that experience, he focused on tropical fish that are often too big or nippy for a regular home aquarium, but not so aggressive that no other fish can be kept with them.  Right now the aquarium population consists of two Tinfoil Barbs, a Silver Dollar, a Buenos Aries Tetras, a two Giant Danios, a Plecostomus, a pair of Firemouth Cichlids, and a pair of Kribensis.

Professor Smith continued, “The Plecostomus looks like something straight out of the age of dinosaurs.  A student donated it years ago.  It doesn’t harm other fish, and no fish is going to pick a fight with it.  With all those spines it has, a troublemaker would be in for an unpleasant surprise!  It loves to eat algae, so that is a great plus.” He also adds that cichlids are fascinating for their behavior.  Many cichlids are too large, aggressive or territorial (even with each other) to be housed in a community aquarium.  (Like cats, cichlids need their space.)  The Firemouths have just the right temperament and size for a setup like this.  They have personalities all their own.  Yes, they sometimes can be aggressive, mainly to each other.  Fortunately, this pair is compatible and have even spawned a few times.  They provide excellent care for their young.

“The Kribensis are a species of dwarf cichlids.  They are smaller than the Firemouths and are easier to keep in smaller aquaria.  I originally had them in my 20–gallon home aquarium and they spawned several times.  I now have six of their youngsters in that tank.  Things started getting crowded and so I donated the pair to the Big Sandy Aquarium” (Professor Smith).

One thing is very certain: Professor Smith’s fishkeeping hobby has given many passerby joy and sparked fascination. His dedication and knowledge of fish and the copious managing of the aquarium is a lesson for us all. Thank you, Professor Smith, for your insight and aquarium work that benefits our College community!