Building A Life by Nicole Jude 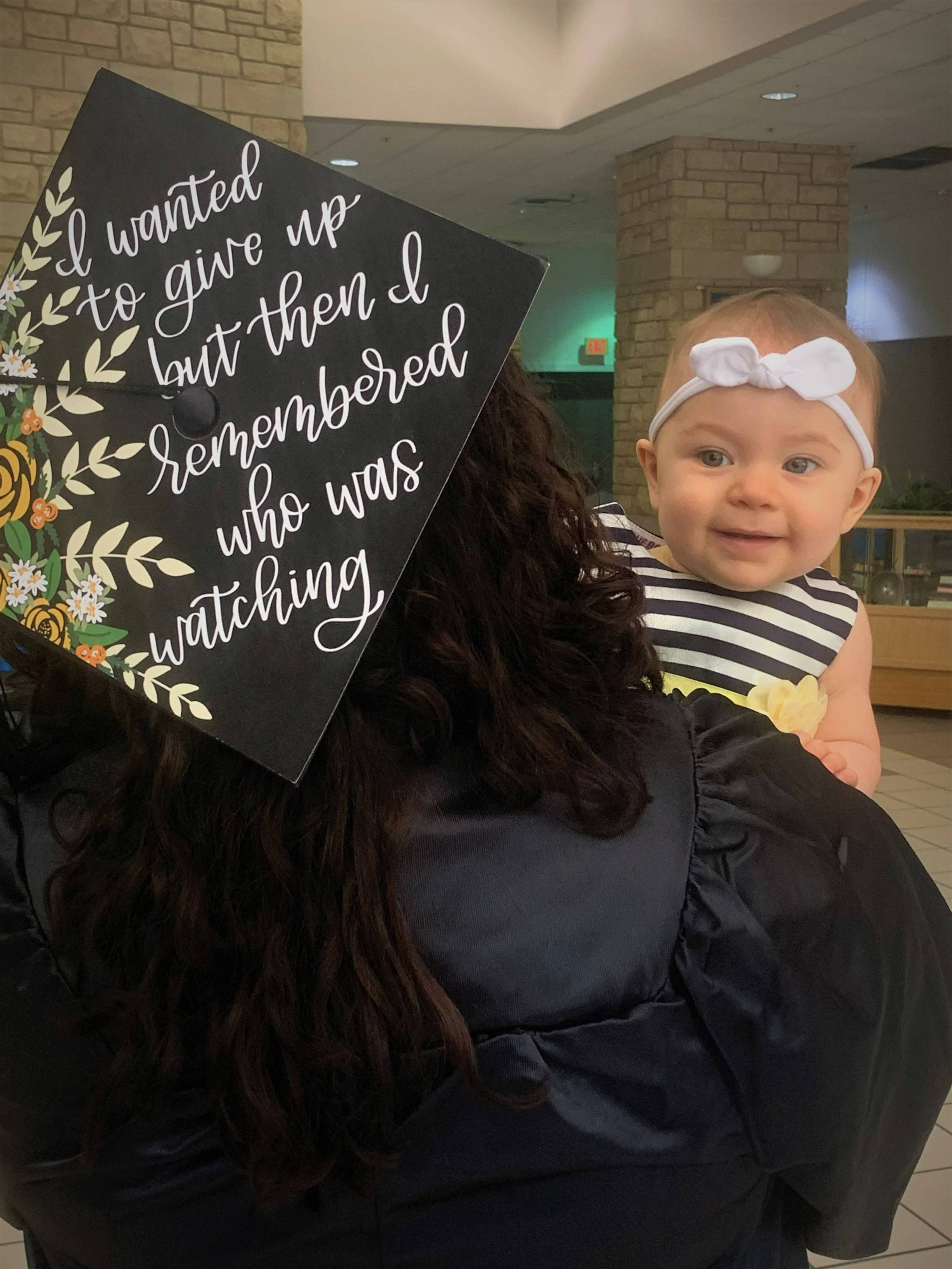 Upon graduating In May from Big Sandy Community and Technical College, my uncle Barry called my mother to congratulate me. He told us of a time when my late great grandmother, Mae, would cry because she didn’t know if I would ever get to attend college. She was worried because I was raised by a single mother in Martin County, Kentucky. My parents divorced when I was only 5 years old and my biological father has since been estranged from my life. When he abandoned us, we succumbed to poverty. This shaped my life in an arrayment of ways. Looking back to my childhood, I never knew how poor we were. I only saw my mother work hard to overcome every obstacle that came her way. We moved a lot when I was growing up and eventually left Inez to start over in Louisa, Kentucky. My mother has pushed me from an early age to not only be successful, but to do something that I love. Despite not having a father figure in my childhood, I had uncles and my grandfather who stepped up to be there for me. My mom got remarried a few years ago to the man I now get to call my Dad. When he came into the picture, my walls came down. I finally let go of most of the resentment towards my biological father and began to heal. If it wasn’t for my family’s constant support and encouragement, I would not be where I am today.

Early on in my academic career, I struggled with school. I couldn’t concentrate in Math and fell behind. I was always too scared to ask anyone for help, including my own family. It only ignited the fear once again that I wouldn’t be able to attend college. I started to resent school because of my relationship with math. Language arts, English and literature classes kept me drawn to school when I felt hopeless. My one escape from reality was through reading books. I lived hundreds of other lives through fiction and found myself relying on that escape. I can recall reading books at a young age where the protagonist had a happy family. I would read and imagine myself being the one with the seemingly perfect life instead. As I grew up and went through my academic career, there were still things I struggled with. When I reached high school, I began to struggle with my own mental health. I felt like an outsider because I didn’t really fit in with a specific group and had a hard time coping with anxiety. I continued to struggle with math, and it devastated me. I continued to push college out of my mind because it just didn’t seem feasible for me. It wasn’t until my junior year of high school that everything started to turn around. I had Mr. Allen as a math instructor and he greatly impacted my academic career. Mr. Allen is also from Martin County and inspired me in the way that he was able to make a great life for himself by going to college. He taught me math for two years in a row and helped me achieve the first A I had ever gotten in math. Through his instruction, I also passed the KYOTE placement exam and it proved my math scores to finally be of college level. For the very first time, I felt hopeful that I could actually get into college and succeed.

I graduated high school not knowing what I wanted to do with my life. I thought I wanted to attend a major university, but I was afraid of being so far away from my mom and step-father. The thought of being on a large campus surrounded by hundreds of strangers terrified me. I decided to enroll at Big Sandy’s Prestonsburg campus because it was a smaller school and so close to home. I had no idea that when I enrolled at Big Sandy, the college would impact my life so greatly. I will never forget my first day on campus at BSCTC. I felt at home instantly due to how welcoming everyone was. My anxiety seemingly vanished as I learned my way around campus. During my first semester at BSCTC, I no longer felt like an outsider. I finally felt like everything had fallen into place.

While attending BSCTC full-time, I also began working for Addiction Recovery Care part-time. ARC was founded by CEO Tim Robinson, who just so happens to be my uncle. As I mentioned above, he has been a great source of inspiration in my life. I have looked up to him ever since I was little. He inspired my love for reading when I was younger by gifting me classic literature books. Along with my mother, he also pushed me to succeed in school. It wasn’t until I was 14 years old that I found out about my uncle’s struggle with alcohol addiction. By then, ARC had grown bigger and really started to take off. I had a really hard time processing my family’s history with addiction because it was something I had never known about. My uncle recovered from his addiction to alcohol and a few years later, he founded ARC. I began working at ARC when I was 17 years old. I have worked in many different areas at the company, and it has allowed me to view addiction with open eyes. ARC has helped thousands of people in Appalachia recover from substance abuse. To work in a holistic rehabilitation center has been humbling to me because of what we get to see daily. Not only do addicts recover through ARC, they also find a relationship with God. I am so proud to say that ARC has been a big part in my life.

In my third semester at BSCTC, I was engaged to be married to my high school sweetheart, Corbin Jude. Our families have always been very close and knew each other before Corbin and I were even born. We decided to get married in September of 2019, right in the middle of my second fall semester. We had so many people tell us that we were making a big mistake. Our families both expressed their worries because I was still in college. We didn’t feel like there was a need to postpone our wedding and got hitched anyways. I suddenly found myself as a full-time college student and now full-time newlywed. We struggled in our first year of marriage and tried to navigate through this new chapter. I enrolled in online courses at Big Sandy and continued my education. After just 2 months of being married, we had the surprise of a lifetime. Just 3 days shy of my 20th Birthday, we found out we were pregnant. After so many devastating years of doctors telling me it wouldn’t be easy due to a medical condition, we had a miracle. I couldn’t contain my excitement. I was shocked to say the least yet, also worried about how I would get through the rest of school. I remember being so scared that I would fail until my mother gave me some words of encouragement. She begged me to keep going for the sake of my baby’s future. I was terrified of being a newlywed college student and soon-to-be mom. My pregnancy gave me the extra push I needed to stay in school and keep going no matter what. BSCTC allowed the opportunity for someone like me to continue my education. I won’t say it was easy, but it was the best thing I have done. I am so thankful I didn’t allow anxiety or fear to hold me back. Looking back now, I see the life my daughter could have missed out on had I gave up on my education. In May of 2021, I graduated from BSCTC with my A.A. degree. At my graduation, I designed my cap to say, “I wanted to give up, but I remembered who was watching.” My 10-month-old daughter, Amelia, watched me graduate. Even though she won’t remember it, it will be something I will never forget. Because of my daughter, husband, and parents pushing me every step of the way, I can say I didn’t quit. Today, I am a first-generation college graduate because of BSCTC. To anyone considering taking that first step, you have nothing to lose and a new life to gain.

In fall 2021, Nicole transferred to Marshall University to complete a Bachelor of Arts in English.