Employees can report in person to campus by 11:00 a.m. or work with their supervisor to be virtual. 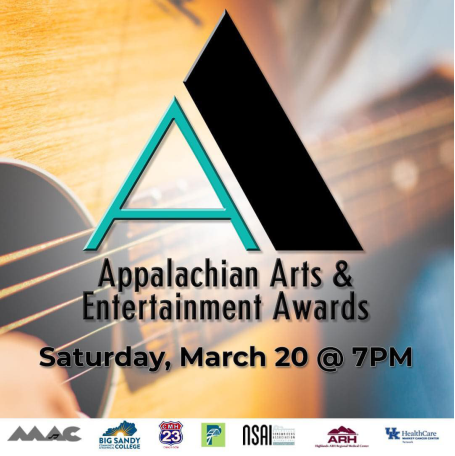 The Mountain Arts Center and Big Sandy Community & Technical College are pleased to officially announce the launch of an annual arts and entertainment awards event beginning in 2021. The Appalachian Arts & Entertainment Awards or “The Appys” will seek to elevate the exceptional work of artists, musicians and industry people from the state of Kentucky and throughout the Appalachian region.

Mountain Arts Center Executive Director, Joe Campbell, stated, “The goal of The Appys is to lead Kentucky in the promotion of musical talent that begins with the artists of central Appalachia.” At the local level, The Appys will increase the awareness and importance of fine arts, blast negative stereotypes about eastern Kentucky, provide scholarship opportunities, increase tourism and reignite pride to the people of our region.

BSCTC will provide educational opportunities for current students to become involved with the promotion and production of The Appys as well as offer scholarship opportunities to awards recipients. BSCTC President/CEO Dr. Sherry Zylka stated, “There is so much opportunity for musicians and other artists in this current time, and we are determined to bridge the gap for artists to earn a better life through our resources.”

The Appys submissions will be juried by a panel of esteemed recording artists, reputable industry executives from venerable organizations represented in the press, music promotion, radio and television programming, music supervision, production and engineering, critiques, talent buying and other influential sectors of the creative industry.

All winners will receive a trophy or plaque. In addition to the prestige of earning an Appy, the winning work is showcased to peers and influencers, including radio programmers, talent buyers, producers and press. Enhanced promotional opportunities may include radio promotion, branded streaming, sync placements, brand sponsorships, performances, events and industry introductions. Scholarships will also be awarded in the education categories.